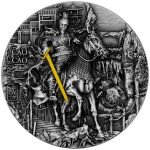 Romance of the Three Kingdoms

Cao Cao, the penultimate Grand Chancellor of the Eastern Han Dynasty. In this dynasties final years, amassed considerable power, laying the foundation of the Cao Wei state, one of the Three Kingdoms. Founded in 220 AD by his son, Cao Pi, it fell to the Jin Dynasty just 46 years later.

Cao Cao is depicted on horseback, sword in hand, in front of a large period Chinese building, likely a palace or fortress. It’s a popular design for coins with Ancient Chinese history as its subject. The sword is gilded with yellow gold, with the horse’s faceplate done using red gold.

The common obverse returns, a nicely designed face that blends the effigy of Queen Elizabeth II into Chinese themed artwork. It’s a classic two-ounce silver coin, struck to a high-relief, and comes boxed with a CoA